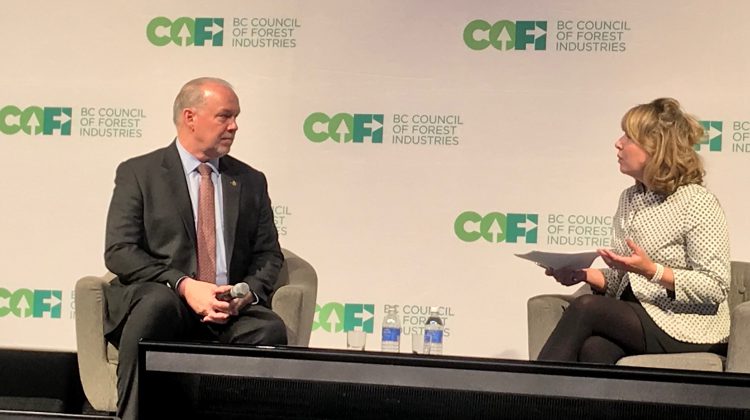 Premier John Horgan highlighted those topics at the BC Council of Forest Industries Convention taking place in Prince George.

The premier says he wants to show how critical the forest sector in BC can be to the world.

“Not only can we build in BC, with engineered wood products, we can be exporting those products like pieces of LEGO to communities around the world. The future is bright for building with wood. It started here in Prince George and it’s expanding right around the province.”

in the Q&A portion of the convention, The premier was asked if there was any plan to move oil products from rail carts to free up space for wood products.

“I appropriately pointed out that BC rail use to be a crown corporation where the government could have brought on more cars to meet the needs of north south. It’s a private company now as a result of the previous government made. We can’t dictate what the private train puts on its tracks.”

What the premier said he can do is try to make it so wood products are favourable to move, but he can’t predict what CN does.

The premier talked about community support when it comes to companies that work in and around Prince George, this brought forward a speculation he may bring back an old policy called appurtenancy, which he touched on.

We can’t depend on our allies in the south and need to expand into other market. @jjhorgan speaking on his trip to Asia | @mypgnow #COFI2018 pic.twitter.com/DJ2gmvQpYZ

“We need to make sure communities feel connected to the forest that they depend on. That was, historically, appurtenancy. Connecting logs to mills and communities for access to that timber. The liberals did away with that, we can’t recreate that.”

“We need to be mindful that appurtenancy or social licences is present and growing stronger, not weaker.”