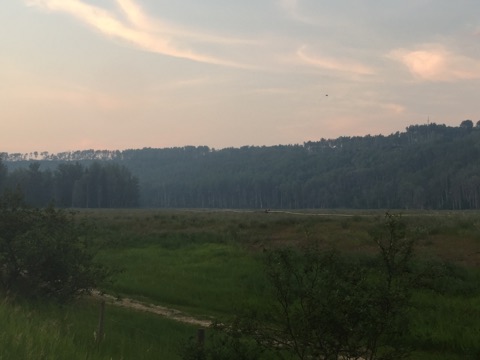 Usually, the weather is a conversation starter if you have nothing to talk about with someone and rightfully so, as it’s something that impacts us all.

Mix the weather in with wildfire season and that’s where it becomes the topic of conversation no matter where you are.

Unfortunately, Environment Canada is tracking little to no rain this weekend for the Bulkley Valley and Lakes District (BVLD). The best opportunity would be this evening and the forecast is only predicting a 30-40% chance.

Someone who’s had a watchful eye on the situation is former area resident and Warning Preparedness Meteorologist, Armel Castellan.

“It’s been a fairly unusual trend for BC as of late. If you can reach back into your memory around May, it was actually record-breaking for how hot and dry it was. In June, it seemed as though things leveled off a bit and there was a bit of precipitation, but not a colossal amount. Then, July rolled around and we didn’t see much if any rain in the last two-thirds of the month. It has been particularly dry and in some cases, areas have seen a rise in temperatures of 2.5 degrees for a monthly average. That’s quite a substantial amount in one months time.”

Castellan says although things have cooled down slightly, it’s looking like it will pick back up heading into the weekend.

“There’s a very isolated chance of scattered showers throughout the BVLD. I would say the more East you go towards Prince George, the more likely you’ll be to find rain. As for the BVLD, you’re more likely to see cloud coverage. Beyond that, it’s looking like temperatures are going to rebound. We’ll see things hover around the mid-high 20’s, which is a little above seasonal. It certainly won’t be as hot as it’s been as of late and won’t really help out the firefighters battling blazes within the District.”

Castellan says although it may not have been much rain, areas like Burns Lake, Houston, and Smithers have seen a relatively decent amount of rain in comparison to the rest of the Province over the last little bit.

“Although there hasn’t been a lot, those areas certainly have seen their share of isolated showers. I know everyone is hoping for rain this weekend but honestly, it’s not looking like it will until mid-late next week at best.”

Residents should also be aware that the special air-quality advisory is still in effect due to the wildfires.