‘This could be the new normal’: Premier John Horgan on wildfire situation 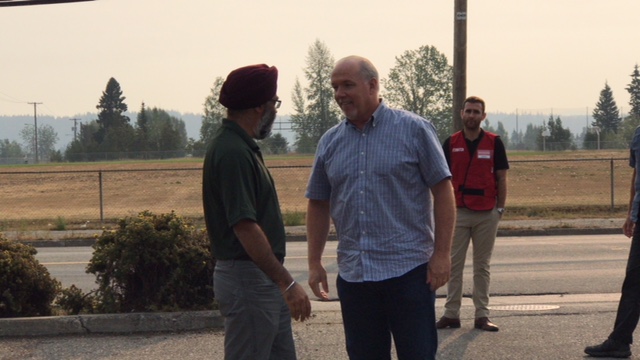 Premier John Horgan is in the Northern Capital to tour the current BC wildfire situation.

He is joined by Defence Minister Harjit Sajjan, stressing they understand how tragic this situation is for people and the frustration they are hearing.

Sajjan also added the Canadian Armed Forces are deployed with 300 personnel on the ground, with 250 being apart of the Land Task Force.

Fires such as the Shovel Lake wildfire could be the new norm because of the way we treat our forests says the Premier.

“We are concerned, all of us, that this could be the new normal.”

“Elders have talked about just the extraordinary circumstances we find right now with the dryness in the forests over the decades. I don’t want to blame anyone but we have not been cleaning our forests. There is too much fuel being left behind and we need to address that.”

.@jjhorgan: “We are far from out of the woods just yet”; the Premier speaks to the impact of this year’s #BCWildfires out west | #CityOfPG #NorthernBC pic.twitter.com/VDEph78ZN6

Horgan was also asked about how much climate change has been a part of this situation, stating his government is trying to adapt to the changing conditions.

“We have been leaders in this province and in the country in terms of addressing carbon pollution. We will continue to do that but ultimately it is about adapting our economy not just here in British Columbia and Canada but internationally.”

As of note, the current wildfire situation has reached over $200 million with the Premier saying they will have to dip into surpluses to help with costs.

“Clearly, the traditional means of budgeting for fire season is laughable. It’s not something that was developed in the past 13 months it has been going on for 30 years.”

He added whatever dollar amount is needed will be there and he doesn’t believe it will affect the budget.

There are just under 600 fires burning across the province as of note.