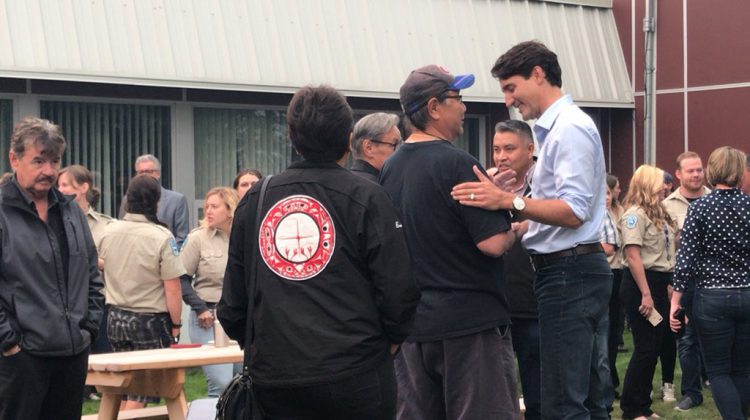 Prime Minister Justin Trudeau says we as a nation need to learn how to protect people from future natural disasters.

This comes as Canada’s leader met with firefighters, first responders, and Indigenous leaders in Prince George this morning, talking about the wildfire situation.

“We’ve been talking about how this season has been long and scattered because of the many, many fires and it’s been something we’ve learned on and improved on some of the challenges in terms of all levels of government working together and needing to improve certain areas. We can really feel that people have pulled together and are doing everything they can about not just working the moments, but thinking about the moments as well.”

There are a dozen blazes of note in the Northwest Fire Centre, displacing thousands of people from their homes.

Trudeau says communication in a time of crisis means more to those on evacuation than anything else.

“There’s always more that we should be looking at when it comes to better integration, better allocation of resources, and better coordination to make sure what is needed is there. People don’t really care whether it’s Federal help or Municipal help or Provincial help, they just want to see the help at the right time the right way.”

.@JustinTrudeau addresses those in attendance for breakfast at the #PrinceGeorge Fire Centre | #CityOfPG #NorthernBC pic.twitter.com/0EG5kbSoqI

He adds those much-needed resources in Indigenous areas should also be available to help elders and children.

“When the neighbouring Indigenous community turns to the province saying, ‘Well we need resources, but no, you’re a Federal responsibility.’ Well, we need to clear up those lines of flowing resources and ensuring that people get what they need, regardless of whether they’re in an Indigenous community or Non-Indigenous community. We need to make sure people are safe, homes and livelihoods are protected, and that’s something that we are very much working on and that we will continue to.”

He believes BC firefighters are more than capable of containing the blazes, but the Federal government is always ready and willing to help.

Trudeau is the first sitting Prime Minister to visit BC’s Northern capital since Kim Campbell in 1993.