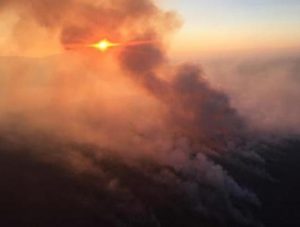 Photo Courtesy of the BC Wildfire Service

This year’s fire season in BC is the second worst on record in as many years.

But, according to the BC Fire Chief’s office, it hasn’t been as bad as 2017’s unprecedented wildfire season, where more than 12,000 square-kilometres of land burned and over 65,000 people were forced out of their homes.

There are still a dozen fires of note in the Northwest Fire Centre and only five within the Prince George Fire Centre.

Shovel Lake continues to be the largest out-of-control blaze in the province at more than 91,200 hectares in size, with several evacuation zones.

This includes an order for the Nadleh Whut’en First Nation and an alert for the District of Fort St. James.

Burning restrictions, including campfires, will also be lifted tomorrow at Noon for the Fort Nelson and Peace Forests Districts.

– with files from the VISTA National Newsdesk