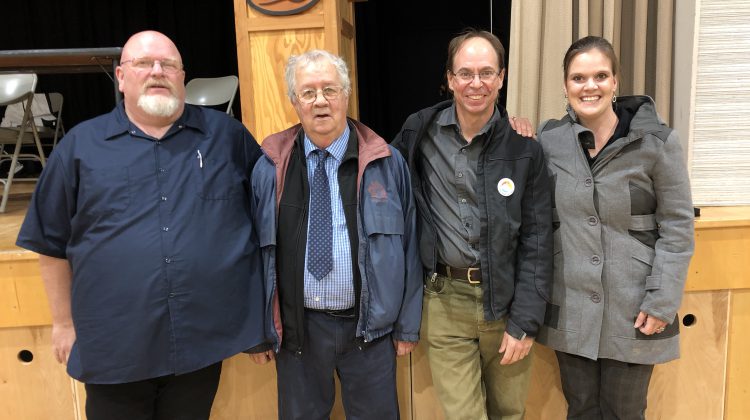 At the All Candidates Meeting for the Village of Telkwa on Monday night both candidates took differing viewpoints on the best way to deal with the villages high taxes.

The two candidates for mayor are Brad Layton and John McDivitt.

McDivitt says his number one priority was lowering taxes and that the way to do that would be stopping the hiring of new people and stop councils spending.

He says, “don’t spend money on stuff we don’t need… we can’t afford it, and then we could afford to lower taxes.”

McDivitt is proposing drop taxes $400 a year per person by “streamlining the system” adding that a village of this size cant affords to operate the way it currently does.

Although Brad Layton agreed that the people of Telkwa pay a lot in taxes, he has a differing view on how the situation needs to be handled.

“We lower taxes we have to cut services, we have managed for the last four years to hold the l rate which determines how much you pay for your house at the same level, even reducing it one year,” says Layton a two-term city councilor.

Layton says the way forward is to “find creative ways to get 100 per-cent funding for projects” so that they can “do the stuff we need without raising our taxes.”

Voting day will be on October 20th, and advanced polls will be open on October 10th at the Village of Telkwa Council Chambers, 1415 Hankin Avenue.

Also at the meeting were the representatives for the RDBN District A Director Leah Germain and incumbent Mark Fisher and three of the four city councilors all running unopposed for village council.