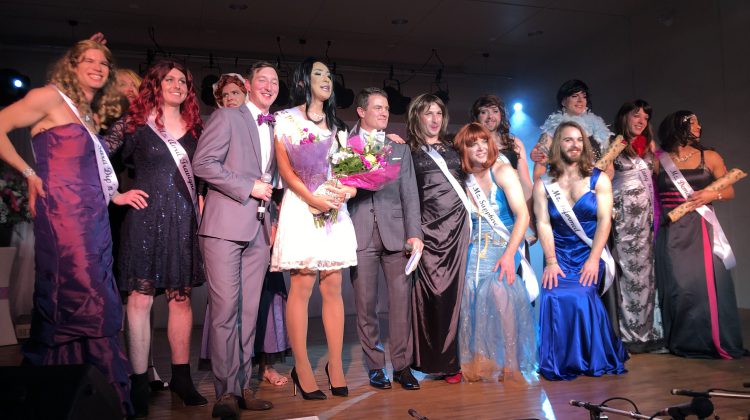 The fifth bi-annual Mz Judged pageant winner with contestants and hosts at the on stage after the competition at the Prestige Hudson Bay Lodge in Smithers, on November 17, 2018, | Photo by Sawyer Bogdan.

“Its donations like that that make the programs a reality and its something that is such a huge thing for our community and what makes NSDP in our town so successful and we are all so fortunate to have those programs available,” said Mayor and co-host of the night Taylor Bachrach.

All the money raised will support NSDP counselling services in Houston, Hazelton, and Smithers for the next two years.

Executive Director for NSDP, Carol Seychuk says, “I have to give most of the credit to the contestant for stepping up.”

There were 12 contestants total, with Mz. Fedup (Ethan McKinnon) taking home the crown as Mz Judged 2018 as well as the honour of Mz Congeniality.

McKinnon says a lot of effort went into preparing for the competition but its all worth it for the cause.

“The event went amazing; I don’t think there was anything I would change. It all fell into place,” said McKinnon.