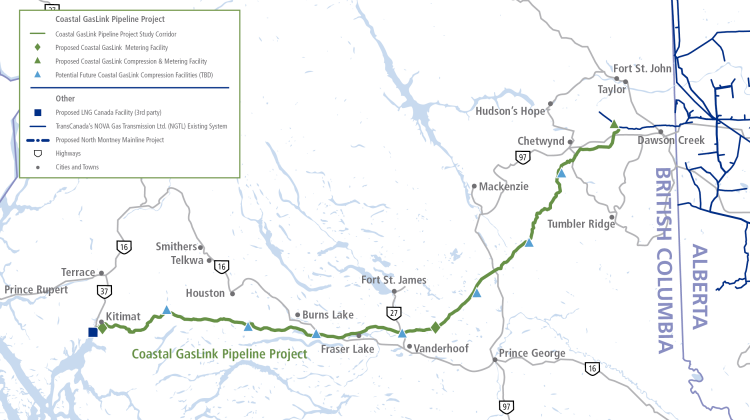 Coastal GasLinks has filed an injunction against the Unist’ot’en settlement for blocking the LNG natural gas pipeline slated to go through their territory.

They filed the injunction in late November to gain access to the Morice River bridge to begin work on the pipeline.

The bridge is part of a public access road that the Unist’ot’en, a clan of the Wet’suwet’en Nation, is blocking as part of a peaceful protest south of Houston.

Chief Na’moks Hereditary Chief of the Wet’suwet’en said protecting an area that’s rich in salmon and clean water is more important than money.

“They are saying we are unreasonable we are not. It’s the last three pieces of our territory that are pristine, every other area of our territory is impacted in agriculture, mining, and forestry,” he said.

Beyond where the initial process is taking place Na’moks said there are not even roads that run through the area and they want to keep it that way for as long as possible.

Coastal GasLink said in a press release “this decision was not taken lightly. Unfortunately, after years of attempting to engage the blockade to work through a solution, this step has become a last resort and a necessary action in our efforts to safely gain access to the area.”

The settlement which has people live year-round to protect the land has been occupied since 2010 and has the full backing of the Wet’suwet’en Nation.

Na’moks said an agreement signed by the Wet’suwet’en First Nations allowing the LNG project to happen has no legal backing because the group that signed it was is a small village within the Wet’suwet’en Nation.

The Hereditary Chefs are the only ones who have the power to make agreements on behalf of the nation about their territory.

Lawyers will meet in Prince George on December 10th to try and reach a resolution, but Na’mocks say they are not backing down.