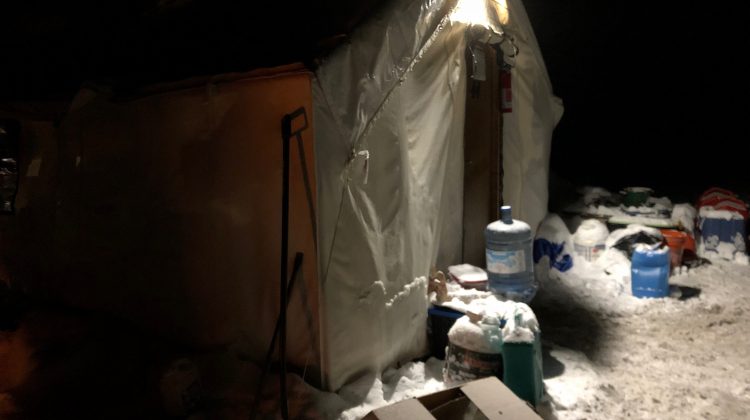 Indigenous camps protesting the LNG pipeline are bracing for the arrival of the RCMP.

On Dec. 14th, 2018, the BC Supreme Court issued an interim injunction against anyone interfering with the Coastal GasLink project, “in and around the Morice River Bridge or the area accessed by the Morice West Forest Service Road,” where members of the Unist’ot’en and Wet’suwet’en have banded together with other supporters to protest the pipeline’s construction.

At around 7:00 am yesterday, the Wet’suwet’en Access Point on Gidumt’en Territory Facebook posted saying that members of the RCMP’s Aboriginal Police Liaison met with the Wet’suwet’en Hereditary Chiefs and “indicated that specially trained tactical forces will be deployed to forcibly remove Wet’suwet’en people from sovereign Wet’suwet’en territory.”

Spokesperson for the RCMP, Madonna Saunderson said, to her understanding, there were less than a dozen officers in the Smithers area, including their Division Liason Team (DLT).

“Our priority has been a commitment to open dialogue and our DLT members have engaged with those leaders and Indigenous communities directly connected with the Unist’ot’en camp. We are continuing to monitor the situation.”

But Molly Wickam, a member of the Wet’suwet’en, said she’d been told differently.

“I personally saw an RCMP river boat in Houston today. There’s reports of several buses of RCMP at the Prestige Hudson Bay Lodge and we know that the Sunshine Inn is fully booked and we’ve seen a lot of RCMP activity and vehicles there today.”

“It looks like there’s going to be excessive use of force by the RCMP, and whatever teams they’re bringing, on the Wet’suwet’en that are here using and occupying our territory. The threat of that force is imminent and I don’t believe they’re going to give us much time to respond to it.”

Saunderson said that the primary concerns of the police are public safety, police officer safety and preservation of the right to peaceful, lawful and safe protest within the terms set by the Supreme Court in the injunction.

“We are very hopeful that there will not be violence or disorder as we enforce the court order; however, the safety of the public and our officers is paramount when policing demonstrations, particularly due to the remote area in which the bridge is located,” she said.

Sawyer Bogdan, MyBulkleyLakesNow is at the scene and we will be updating as information becomes available.