UPDATE: RCMP believed to be taking down Gidimt’en gate 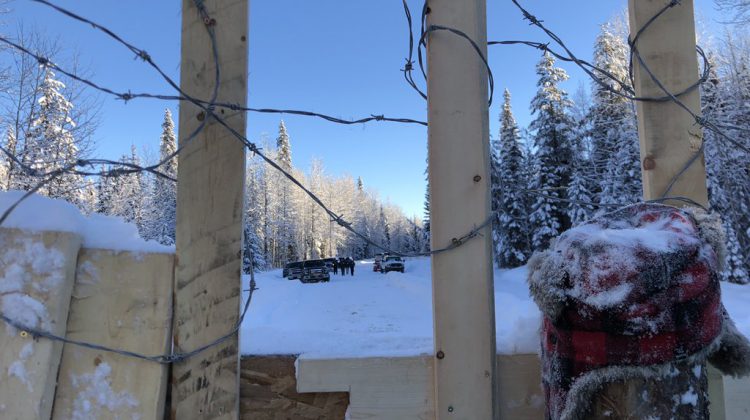 According to My Bulkley Lakes Now reporter Sawyer Bogdan, RCMP are breaching the gate at the Unist’ot’en camp.

Communication lines have also been cut off for the camp, including their wireless internet access, and Bogdan added arrests are imminent.

RCMP liaisons arrived before 11AM this morning with the injunction on behalf of the company wishing to construct a pipeline through the Wet’suwet’en territory.

After much anticipation this morning (Monday), several RCMP officers have met with campers near Houston.

They intend to enforce an injunction on behalf of the LNG company that plans to build a pipeline through the Wet’suwet’en territory.

RCMP have set up their own checkpoint before the camp. RCMP will let Hereditary Chiefs through @TheMooseBVL @UnistotenCamp #thetimeisnow pic.twitter.com/NM8UyNhRZ6

“They’re asking if they can meet to talk about taking down the gate, but we asserted that they need to allow the hereditary Chiefs onto their own territories,” explains camp spokesperson and Wet’suwet’en member Molly Wickham.

“They said that they would have to talk to the commander of operations.”

Wickham further states one Hereditary Chief from each of the five Wet’suwet’en nations was invited to come and speak with RCMP liaisons.

“We had to kind of negotiate that a representative of each clan would be allowed in, so if they’re not here then they would not be allowed in, effectively blocking access of Wet’suwet’en Hereditary Chiefs from their own territories.”

All others will not be allowed past the RCMP checkpoint.

– with files from Sawyer Bogdan, My Bulkley Lakes Now