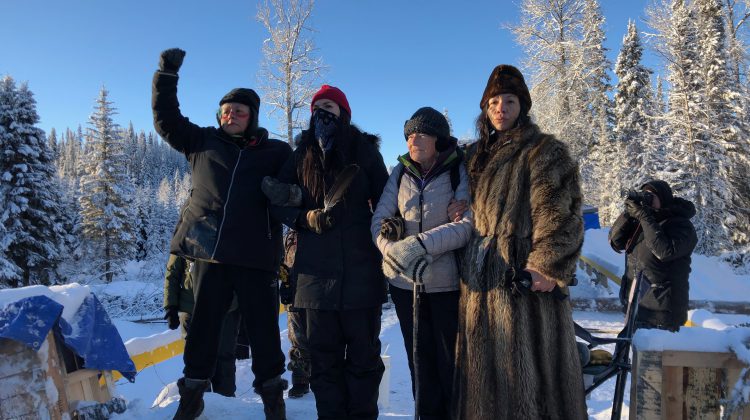 RCMP broke through the Gidimt’en checkpoint in the early Monday afternoon and arrested supports to enforce the Coastal Gas Links injunction.

The checkpoint has been in place since a judge granted an injunction on December 15 allowing Coastal Gas Links (CGL) access to the initial Unist’ot’en camp.

Unist’ot’en have been protesting the CGL pipeline for the past 10 years in an attempt to preserve their land and water for future generations.

RCMP liaisons had initially said CGL would be the ones to dismantle the blockade.

After a representative from CGL spoke to Hereditary Chiefs and the checkpoint and those talks were unsuccessful, RCMP said they would be enforcing the blockade and started to dismantle the gate.

The Hereditary Chiefs maintain that they have never given up their right and title over their land and have never granted CGL permission to go through their territory.

Unist’ot’en supports at the camp stood their ground against RCMP, and most were either arrested or detained and later let go.

Those that were behind the barricade and fortifications retreated to the Unist’ot’en camp up the road.

RCMP arrested 14 individuals including spokesperson Molly Wickham and a woman in her 70s.

At this time it is unknown when RCMP will enforce the injunction on the Unist’ot’en camp.

Barriers remained in place at the time media left, including three large trees blocking the road, and a school bus.

One supporter remained in a hammock hanging off a log that was over the bridge in addition to possible few still chained to the bottom of the school bus to prevent the barriers from being moved.