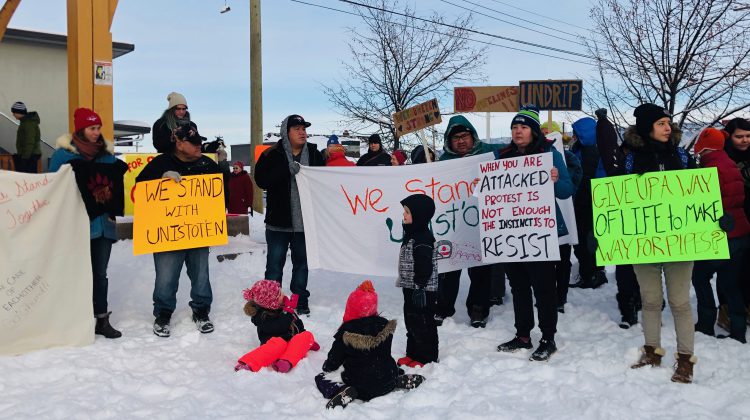 Rallies of solidarity have been taking place in Smithers and across the country in support of the Unist’ot’en after RCMP broke down the first barricade at the Gidimt’en camp.

Smithers residents set up a solidarity rally in Bovill Square today at noon to support the with Wet’suwet’en during their fight with Coastal Gas links over a pipeline planned to go through their territory.

Chief Na’mocks Hereditary Chief of the Wet’suwet’en spoke at the rally said its the duty of the Hereditary chiefs to protect the land, water, and all who reside on it.

“The Wet’suwet’en did not start that conflict yesterday, but we certainly will finish it peacefully because this is our land and we have never seen nor signed or surrendered a treaty that says they had the right to do what they did yesterday,” said Na’mocks.

Na’mocks left the rally in Smithers to attend a second rally in Hazelton.

On Monday RCMP enforced the Coastal Gas Links injunction against the Unist’ot’en and Gitimt’en Camps by breaking through the first blockade on the Morice River road.

Spokesperson Molly Wickham has appeared before a judge today and is being released from jail.

A supporter who was at the court in Prince George today said five of the people arrested were released after signing an agreement they would not set up another blockade with one person saying they would sign under duress.

She said the seven others who were arrested refused to sign stating they don’t recognize colonial law.

CGL is in the process of clearing away the debris, and fallen trees from the Gidimt’en camp and RCMP will be advancing to Unist’ot’en once the way is clear.