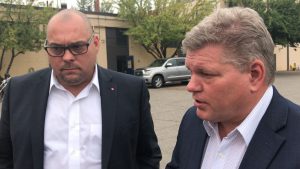 It’s been over 200 days since Bill C-211 calling for a national framework on post-traumatic stress disorder and other mental health injuries for our first responders was passed.

Since that time, more than a dozen military members took their own lives in 2018 where its believed Ottawa is dragging its feet contacting stakeholder groups on the framework.

Cariboo-Prince George MP Todd Doherty has championed Bill C-211 since the word ‘go’ and is disappointed with the recent news.

“We are losing our veterans, we are losing our military members and first responders at an alarming rate and the challenge we see is that mental illness is an invisible injury, unlike a broken arm or leg.”

The piece of legislation is supposed to assist first responders, but Doherty is of the opinion the volume of casualties from the past year is actually higher than reported.

“I would hazard to guess that it’s probably higher than they released because very often those suicides don’t get reported because of the shame and the stigma attached to it.”

The reason terminology is being brought up is because there are too many cases where a simple condition such as Post Traumatic Stress Disorder is falling under different names or meanings in several parts of the country, this is a change Doherty would like to see implemented.

“There is no consistent standard for even diagnosis or care from one end of our country to another. You have people who are falling through the cracks all the time and there are so many different terms for this as there are for diagnosis, care, and treatment. C-211 was all about getting people to the table so that we could develop this national framework  and in the 18 months so it became law the government as a duty, the mandate they have to come to before parliament and in front of Canadians to say here is what we have done, here is where we are and here are some of the success and challenges we’ve had and in my mind, they have failed to do that.”

What’s more disturbing to the Federal Conservative MP is as soon veterans return from duty and attempt to adjust to civilian life once again they are seemingly stonewalled by their own country.

“It’s incredibly frustrating for me everybody I get somebody that comes up to me who said thank you for the job you did on this bill or we see cases where a guy like Christopher Garnier case who is a convicted murderer and never served a day in his life and he is in prison and is also receiving benefits from Veterans Affairs and yet he hasn’t served a day in his life and then you have Captain Kimberly Fawcett who’s having to battle to try and get any form of benefits, treatment or resources for her injury.”

“We continue to put those barriers up in terms of the services they require to be made whole and that’s what Bill C-211 is trying to alleviate.”

The Federal Conservative calls it a ‘very powerful statement.’