Start of winter storm arrives in Northern BC 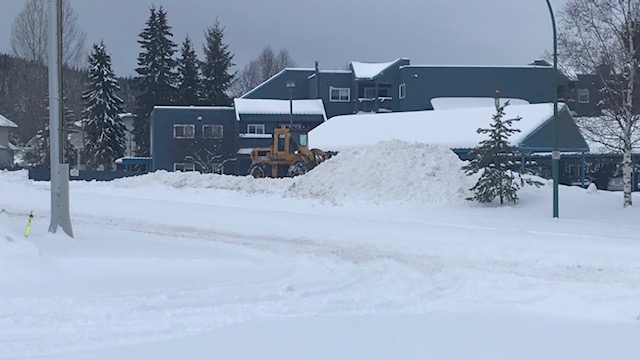 A winter storm warning remains in place for Prince George, Vanderhoof and the Bulkley Valley as a massive dump of snow is expected to wallop the region.

The next 36 hours are going to be a challenge for drivers as the white stuff isn’t expected to stop falling until Saturday.

As for exactly how much snow, we’re going to get, Environment Canada Meteorologist Lisa Erven tells MY PG Now it depends on where you live.

“We could be getting upwards of about 30 centimetres by the time Saturday rolls around. The highway leading north out of Prince George (Highway 97) as well as the Yellowhead Highway (Highway 16) towards McBride, those seem to be areas where our models are picking up more extensive snowfall as up to 50 centimetres could fall by the weekend.”

“It is a long duration event that we’re looking at, it started last night and is going to continue throughout the day today as the snowfall efforts are expected to pick up later this afternoon and into the overnight and are expected to continue until Saturday morning.”

If you do plan on heading out on to the roads, Erven laments drivers should be prepared as the conditions will only get dicier as the snow continues to mount.

“Not only do we have snow that’s going to be accumulating on the roads, but we’re also going to have some strong winds that are going to be picking up later this afternoon and into the overnight so you’re going to see that blowing snow component to further reduce visibilities for anyone out there on the roads. If you are going to be travelling, it’s good to take extra precautions for the next 36 hours. We’ve got rapidly accumulating snow on the roadways, reduced visibility and blowing snow so make sure your car is stocked with extra supplies like extra blankets and supplies just in case you get stuck.”

Alerts are in place for Highway 97 and the Pine Pass along with Highway 16 to the Alberta Border.

To make matters worse, overnight lows are expected to dip in to the -20 and -30 range by the weekend.