Wildfire season gearing up to be much the same as the last, says owner of Safeguard 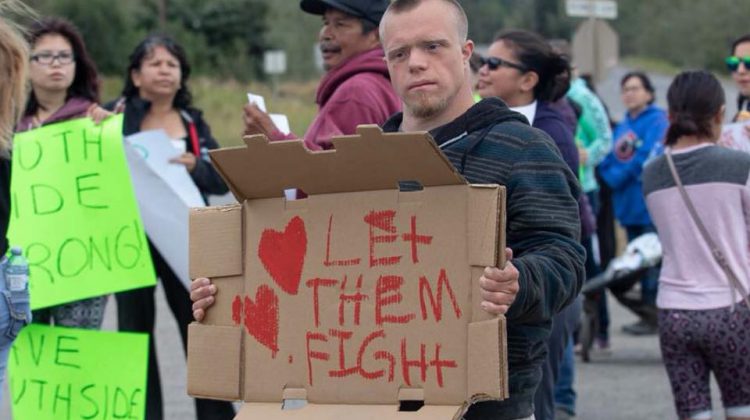 A protester in Burns Lake. Photo from Carla Lewis

Trucks wait in Burns Lake to cross the ferry over Francois Lake. Photo from Dona Blyth

The Province of British Columbia has announced efforts to invest more in wildfire prevention and community outreach, but does that mean this wildfire season will play out differently than the last?

His crew, a fleet of 28 trucks carrying Mass Water Sprinkler Systems, was denied access to the ferry over to Francois Lake in the midst of an evacuation order and fires burning at a combined 112,000 hectares.

The move sparked a protest at the terminal and allegations of false information being spread by BC Wildfire in August of last year.

“I see very little change from the past two years. I don’t think we have a solid framework of community wildfire preparedness and response programs that is going to work,” said Kelly.

The province recently announced they would be upping funding for wildfire prevention annually to $101 million. Kelly said Safeguard has reviewed over 50 programs in BC.

“Most of them are built by Registered Professional Foresters (RPF) that don’t know fire, and it shows. They know how to count trees, they thin trees. They don’t know how 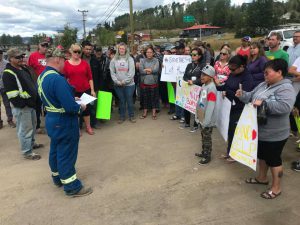 Jeff Kelly addresses a crowd of protesters in Burns Lake.

to respond to a fire scenario, they don’t know proper hazard and risk mitigation, project management, and have the fire training necessary to understand what will help truly stop a forest fire.”

Kelly has been volunteering his time to help train people in a number of communities, including the Chinook Emergency Response Society in Francois Lake.

Chair of the District of Bulkley Nechako and Vanderhoof Mayor Gerry Thiessen, said his understanding of the process is that the District will have to have a plan approved by the province for how the funding will be used, which he is hoping to have down on paper in the next two months.

“We’ve looked at that funding that is coming out and we’ll be going out and training people to understand FireSmart and ensure that, as much as possible, you make your property resilient to fire.”

“This should be a perfect scenario to work together with the people of Francois Lake to make sure that they don’t have to go through 2018 again,” added Thiessen.

Kelly urged that we shouldn’t be taking the term “the new norm” in regards to wildfires lightly.

“It’s very important that we don’t look at the last two years as isolated. I think we have a short memory. We get one rainy season and everyone forgets about it. It’s very important that we look for all the necessary weaknesses in our programs and fix them now. We’re going into spring now and all indications are that we could have as bad or worse of a year than the last two years.”