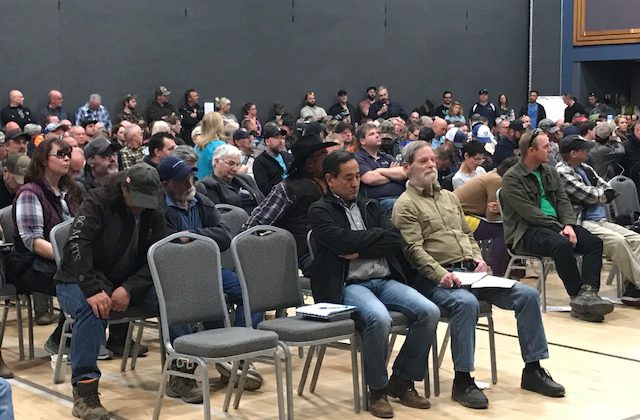 Line up at the PG Civic Centre | Photo by Cole Kelly, MyPGNow

There were more questions than answers and more concern than comfort this evening at an engagement session for a tentative caribou recovery plan.

The provincial and federal governments have drafted two agreements under section 11 of the Federal Species at Risk Act. They set a framework of co-operation between the two governments to recover southern mountain caribou.

Before the event even began, the line up was almost out the door at the Prince George Civic Centre, and inside there was barely room to stand – the fact of which was a point of contention, among quite a few points of contention, for some members of the audience.

The five panellists, made up of five provincial, federal and Indigenous representatives assured the audience that the session was about giving information and getting feedback that they could use to make a final decision with. 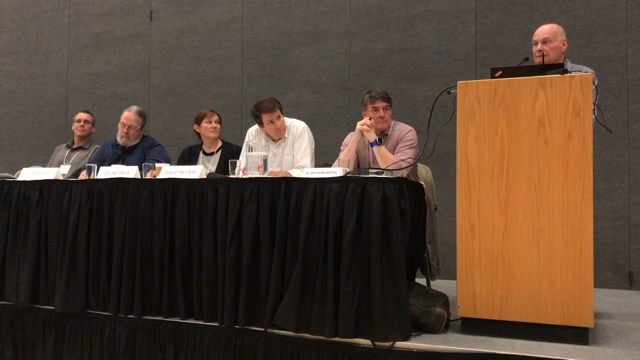 Question period brought forward a myriad of subjects, including a lack of scientific evidence that the recovery could work, the effects of herbicide spraying discounting those efforts, the closure of recreational areas, the effect on industry in the area and the inadequate space the panel had chosen to present in.

The list of concerns, documented by the presenters as the questions came in, grew to more than three pages long in the first half of the four hour session.

“I want to make sure that you are reaching out to professional members of all communities when you start closing down backcountry areas, it’s our constitutional right,” said one attendee.

Another felt there wasn’t enough information, “We don’t know the numbers of the surviving caribou, where’s the science in that? Where’s the science so the people can see? That’s what we want. You’re giving us nothing.”

“I’m not sure what kind of crowd you think you have in front of you, but I can assure you that there’s a great number of people in this room that have read pretty much all of the research that has been published on the subject. One of the most consistent items is that one of the major issues for caribou is that by the end of the summer, all of the calves are gone; predated by wolves, black bears and grizzly bears. Why is nothing being said about wolf control?”

For one attendee, the recovery plan isn’t being implemented fast enough. 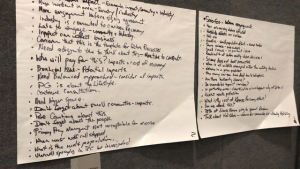 “I am very troubled by the kinds of issues that are being raised by the audience members. We know that the caribou are in trouble because their habitat is disappearing because of roads and industrial logging. We know that the only obvious, best way to protect caribou, is to protect their habitat, and we have to do that right away. I can’t see any interim protection in section 11.”

Conservation officer Steve Ackles said “I’ve heard some comments on sledding, people saying they don’t see caribou tracks where they are sledding, that those are all closed areas and they’ve never seen a caribou. Well, we do patrols in those closed areas and we see sled tracks on top of caribou tracks. Everyone has an opinion, but I’m seeing things that are obviously contrary.”

Acting Mayor Kyle Sampson said for the next session they will definitely be needing a bigger space, “This is important to Prince George, this is important to the region, there’s going to be a big turnout at every one of these consultation pieces, and hopefully there’ll be more of them.”

The province has said that all feedback received will be compiled into a “what we heard” document which they will make public and all input will help inform all parties’ decision-making regarding the finalization and signing of the agreements.