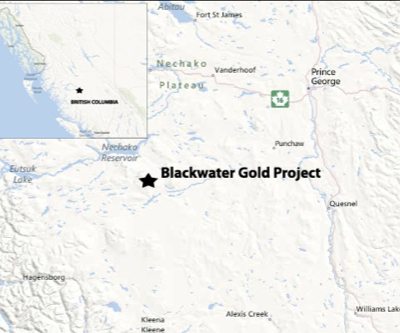 The site of the Blackwater Gold Project. (MyBulkleyLakesNow)

Efforts by the Province to protect the environment, as well as grow the economy, are looking pretty good for those in the Nechako Valley region.

The Minister of Environment and Climate Change, Catherine McKenna, has given the go-ahead for the Blackwater Gold Project.

The project consists of the construction, operation, and closure of an open-pit gold and silver mine, which is located 110 kilometres southwest of Vanderhoof.

Estimated at $1.8-million, the project could create upwards to 1,500 jobs during the course of the construction and 495 during the operation over the life of the project.

As proposed, the Blackwater Gold Project would produce 60,000 tonnes per day of gold and silver ore, over a mine life of 17 years.

Following a science-based environmental assessment, it has been concluded that the project is not likely to cause any significant adverse environmental effects when mitigation measures are taken into account.

New Gold Inc. can now proceed with obtaining any additional authorizations and permits from federal departments.

The decision made by the Minister has 172 conditions that must be fulfilled throughout the life of the project. These conditions are laid out to eliminate the potential effects on the environment and include measures that will help in the protection of wetlands, fish and their habitat, migratory birds, the current use of land and resources by Indigenous Peoples, physical and cultural heritage and structures, as well as wildlife and species at risk.