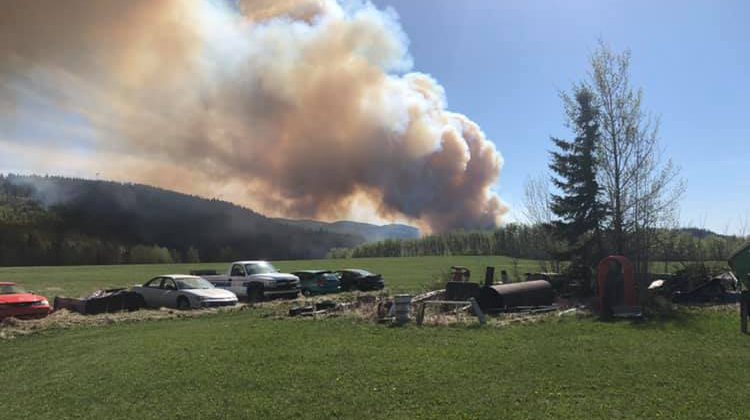 The Lejac fire on Saturday, May 11 | Photo courtesy of Beverly Ketlo

The Regional District of Bulkley Nechako has rescinded the Evacuation Alert for the Lejac Wildfire.

Molly Blower with the BC Wildfire Service said the change in weather has helped.

“The crews have made great progress and with the factors of around five millilitres of precipitation, higher relative humidity numbers, and lower temperatures have resulted in the evacuation alert being rescinded.”

She added the fire is still 70 per cent contained, with the other 30 per cent being a natural barrier. Crews are working towards 100 per cent.

Regional District of Bulkley-Nechako Board Chair Gerry Thiessen said they are grateful for BC Wildfires quick response but is concerned with the early start to fire season.

“When I was young we used to get fires in July or August, then it started from early July and into June and to be in early May is quite unusual.”

“We have seen the drought conditions going on the last 12 months, we had a very dry summer and went into the fall with a little bit of precipitation. It really has affected our water table.”

Thiessen reminds everyone heading into the long weekend to be careful and cautious.