Law’s not enough pertaining to dogs in truck beds, according to SPCA 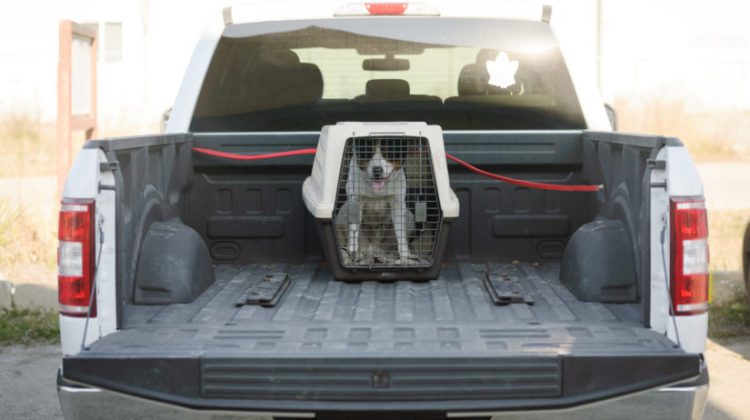 A photo demonstrating the recommended way to secure a dog in the back of a truck when traveling. (courtesy of SPCA)

Simply put, dogs just need to be secured in some way.

According to Section 72 of the Motor Vehicle Act and Section 9.3 of the Protection Against Cruelty to Animals (PCA) Act, it’s prohibited to travel with an unsecured pet in the back of a pick-up truck.

With discussion coming on many community social media pages for Prince George with regards to laws pertaining to dogs riding in the bed of pick-ups, Manager of Community Engagement with the North Cariboo and Region SPCA, Alyssa Stauble, says there is a recommended method in securing your pooch in a truck bed that they hope people would consider, if not already.

“The law is broad,” Stauble told MyPGNow. “The SPCA recommends that animals being transported in the back of a vehicle are in a secured kennel pushed to the back of the box, next to the cab, and in the middle.”

The SPCA state that unrestrained pets are a major distraction to drivers and can cause vehicle collisions. In a crash, pets become flying objects and can cause serious injury to themselves and others.

Even if a dog is secured by a leash, Stauble states the leash is needing to be short enough to restrict the animal from being able to climb up against the sides of the bed, but long enough to allow the dog to lay down.

“The law doesn’t say exactly how you should secure your animals, and obviously we do recommend the kennel as the best way to transport,” said Stauble. “If the dog is put into a situation where they can fall out of the box of the truck, which unfortunately does happen, and is dragged then that owner can be charged under the PCA Act as that is considered animal cruelty.”

Especially with vacations being planned for during the summer months, the SPCA has some preparations to consider in order to keep your pets safe when traveling.

Stauble said a general consideration of your dog’s welfare is always a good idea before making any decision pertaining to your furry friend.