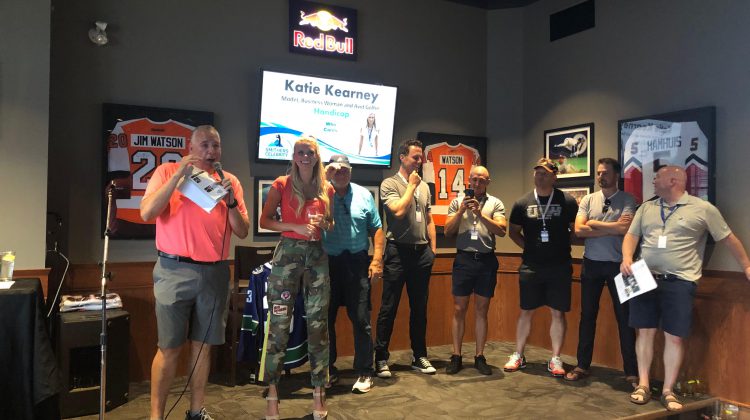 Everybody joined together at Boston Pizza for a meet and greet and auction. The auction was created to help raise money for the Bulkley Valley Health Foundation. So far, the tournament has raised over $60,000. Familiar names were up for auction like Joe Watson, Steve Darling, Katie Kearney, Todd Talbot and the members of B.C band Faber Drive.

Before the auction started tournament organizers gave a special shout out to Joe Watson, NHL alum who has been at the tournament every year since the tournament began in 1991. A video was made in honour of Watson for his support. 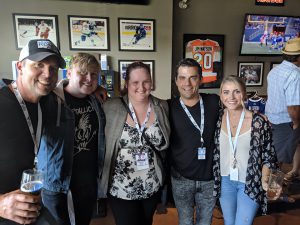 Watson said he enjoys coming back to his home city even if it is just once a year.

“I left here in 1959 so, I haven’t really lived here since ’59. I come back for two or three months and that’s it but I always enjoy it when I come back,” said Watson.

Another alum for the tournament is former Global BC anchor Steve Darling. Darling hosted Thursday night’s auction (Aug.8) and will be the host throughout the weekend with Dan Hamhuis.

Darling said the people that organize the tournament are so successful.

“By getting people up here to come and experience what is great about Smithers, is not only great for the tournament but is also great for the community”, said Darling.

Getting ready to head back for the @CelebrityGolfin event hosted by myself and Dan Hamhuis. Continues to be one of the best events I attend. Raising tons of money for charity. pic.twitter.com/PWuzJd2UPI

Todd Talbot from HGTV’s Love It or List It also is a regular when it comes to the Air Canada Smithers Golf Tournament. Last night during the auction he received a bid of $1000 dollars.

Talbot said the event is great because they love the small-town vibe.

“It seems everybody comes out to support this event. It becomes a whole kind of community effort and I think the people who volunteer and drive us all around and everyone who contributes to this is so nice,” said Talbot.

Even though the tournament had some alums who have been there more than once there were also some new faces. Model and golfer Katie Kearney is one of them. This is Kearney’s first time in Canada.

Kearney said Canadians have surprised her with being so nice.

“You hear different stereotypes and you never think they will actually live up to it. I mean even though TSA which, is a headache every country you go but, in Canada, it was a pleasure, I love it here” said Kearney.

First time EVER to Canada (even to my own surprise). Daddy/daughter golf trip ♥️ any recommendations in Vancouver?

Kearney was the highest auction the entire night, getting a bid of $4100.

Organizers are hosting a concert tonight hosted by Faber Drive for celebrities and sponsors and the tournament is on Saturday (Aug 10).