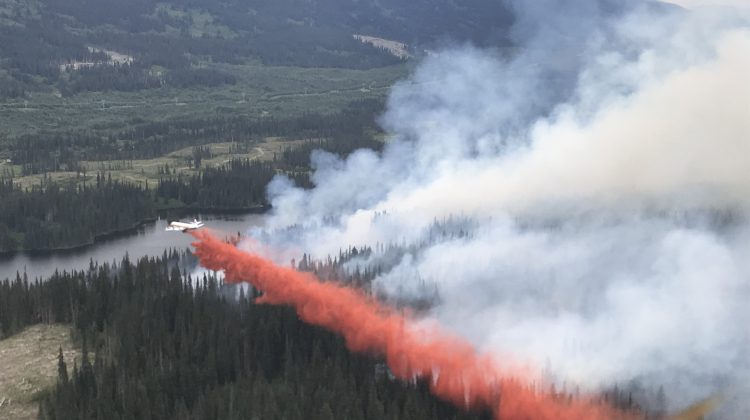 The cold front that has been making an appearance through the Northwest Fire Centre has caused a downturn in fire activity.

The Tagish Lake fire is located 40 kilometers outside of Atlin and is 1.200 hectares. Fire crews have removed any hose lines and water supply equipment.

Carolyn Bartos, Fire Information Officer with BC Wildfire said there no longer an evacuation order in place for this fire.

“It is now in a monitor only stage, which means there are no firefighters on location at this time,” said Bartos.

The largest fire of the bunch is the Barrington River Fire. It is located 50 kilometers west of Telegraph Creek and is 4,600 hectares.

Bartos also says it is still burning 25 kilometers from a fish camp at Tahltan Lake.

“That fish camp is receiving structure protection at this time but it will be assessed for demobilization,” she said.

Another fire being monitored is the 2018 Alkali Lake fire. It originally was 5 kilometers west of Telegraph Creek. There were nine holdover fires within the perimeter which burned slowly over the winter months and ranged from one hectare to 40 hectares.

The fire has been taken off the public website.

The last fire that is on the radar is the Mehan Lake fire.

It is located 4 kilometers south of Bell II and is burning about 58 hectares.

Bartos said this fire is considered under control and smoke is no longer seen from the highway.

“It will be monitored by wildfire officers and at this time it doesn’t require firefighter to be on location,” she said.