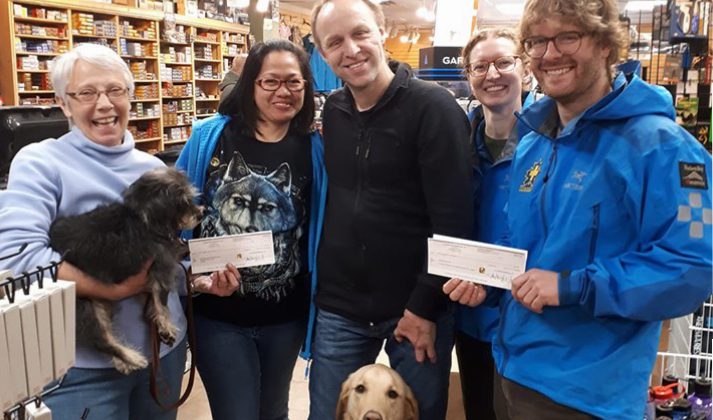 The money has been counted from the Banff Mountain Film Festival.

Outdoor Essentials in Smithers handed over the cheque for the money raised to the Northwest Animal Shelter and the Smithers Ski Patrol.

The animal shelter and the Ski Patrol each received $1200 making the amount raised from the film festival $2400.

Sieghard Weitzel, Owner of Outdoor Essentials said the idea of the Banff Mountain Film Festival came to him 20 years ago by a sales representative.

“It turned into an annual tradition that I’ve been doing every year since and we try to raise some money for some of the charities in town and there have been several involved over the years,” he said.

Outdoor Essentials have worked with the Smithers Ski Patrol and the Northwest Animal Shelter for the past few years.

Jean O’Sullivan, Vice President & Secretary of the Northwest Animal Shelter said they will be putting the donation towards vetting for the animals.

“We’re very grateful to have this donation made. We would use it for many things but one of our main costs is vetting expenses for animals who come in because they cannot be adopted out until they’ve been fully vetted,” she said.

The Banff Mountain Film Festival was held on Sept 26 at the Hudson Bay Lodge and was sold out.