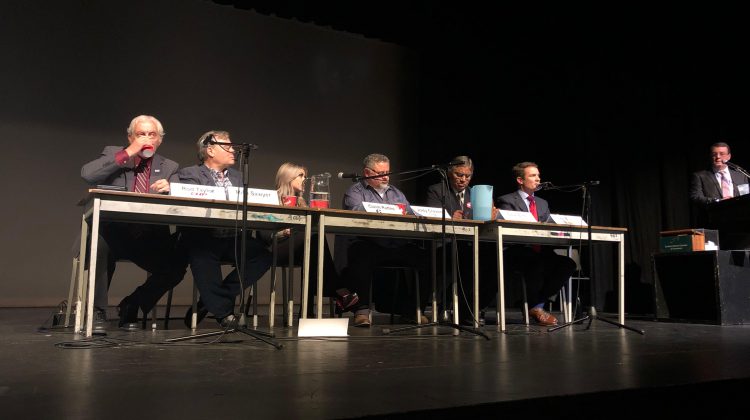 Six out of eight Skeena- Bulkley Valley candidates attended the All Candidates Forum on Tuesday (Oct 15). (supplied by: Lindsay Newman)

Six out of the eight Skeena- Bulkley Valley candidates joined together in Smithers on Tuesday (Oct.15) for the All Candidates Forum Debate.

The event ran for over 2 hours and featured questions by the community.

A young student asked the candidates how they would stand up for missing and murdered indigenous women.

Liberal candidate Dave Birdi was the first to answer the question.

Birdi said his party is promoting more buses to the indigenous communities.

“We’re promoting is increasing the cell service along the highways all across this region. At least if there is cell service the individual might be able to contact their families or relatives,” he said.

Taylor Bachrach said the NDP government would implement all of the recommendations at the national inquiry for the topic.

“We are ensuring our indigenous women and girls throughout our region are safe and we are tackling the underline root causes including poverty and discrimination and racism in our communities and , my hope is that working together we can make a positive change for the better,” he said.

People’s Party, Jody Craven said from day one of his campaign he has stated there needs to be more cell phone coverage along the highways.

“There’s no reason why we can’t do that nowadays. It’s not a solution but it’s just a piece of the puzzle,” he said.

Conservative candidate Rattee bounced off what Craven said and mentioned that she agrees cell phone coverage is important but the area is often forgotten about.

Rattee also said there needs to be better funding for transportation for Rural communities.

“For some reason, they will spend billions of dollars on transit services in Vancouver and Toronto and yet we don’t have an effective transportation service between communities. Many of the people that make up the smaller communities of our riding have to travel to get groceries and things of that nature,” she said.

Greens Mike Sawyer agreed with what Bachrach said previous but added the party wants to focus on the drivers of the problem.

“We have to actually go to these communities and ask them what we can do to make these things better,” he said.

Christian Heritage Party, Rod Taylor took this question on a more personal approach because he worked in Witset and knows some families personally who have been impacted by the missing and murdered indigenous women and girls.

He said he can’t understand why there is no proper investigation.

“We have a violent society and somehow we have allowed our young people to grow up with a sense of purposelessness and enjoying the concept of violence,” he said.

Bachrach used one of his rebuttal cards during this question, talking about the transit on the Highway of Tears.

He said as the mayor of Smithers he spent years trying to improve transportation.

“I spent 5 years working with other local government leaders making that happen, working with First Nations happen and my conservative opponent was a part of the government during those times and I’m just wondering where her voice was?,” he said.

Rattee then went back at Bachrach that her voice was advocating for the better transit in the riding.

She also said she took offense to the NDP and Green Party’s previous statements.

“I don’t know if any of you have actually met with those families or any of the survivors but it wasn’t just poor people that go missing,” she said.

The Federal Election will be held on October 21, to see where to vote look on the voter information card or elections.ca.