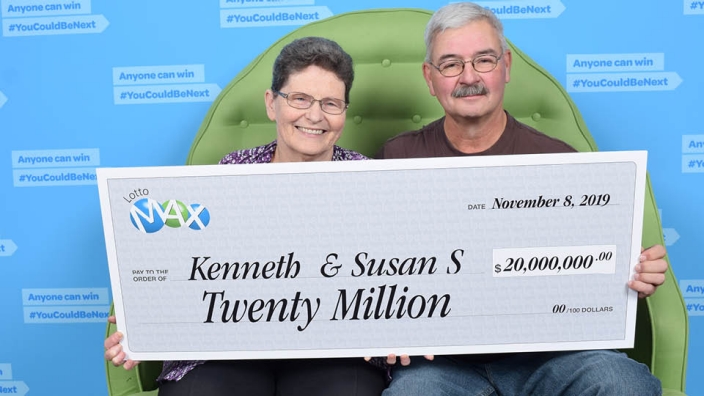 Ken and Sue Salter with their $20 million jackpot (supplied by: BCLC)

A Telkwa couple were in Kamloops Friday (Nov 8) to pick up their prize after striking it rich on a Lotto Max ticket.

Ken and Sue Salter are one of the latest winners in a collection of lotto max winners over the past week after winning $20 million dollars.

The couple matched all seven numbers on the Oct 29 draw.

“I’m shocked, disbelief, this actually happened to me I can’t believe it,” he said.

Sue Salter also explained what they intend to spend the money on.

“We’re going to help our kids first and we’re definitely going to build a house all one floor because we hate stairs and Kens helping a few friends as well as his family and probably invest the rest,” she said.

According to the BCLC, Salter doesn’t normally play Lotto Max on Tuesday’s but he had a winning ticket for $20 from the previous Friday draw

The Salter Family has no plans to leave the Village of Telkwa.

British Columbians have claimed more than $199 million in Lotto Max so far in 2019.