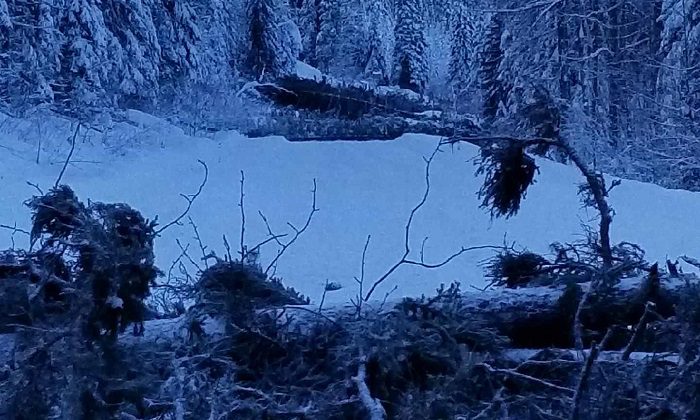 The RCMP has launched a criminal investigation into the blockade of fallen trees near Morice West Forest Service Road.

On Monday (Jan 6), Police located felled trees at the 39.5-kilometer mark during regular patrol where they continued to patrol towards the 44-kilometer mark and found another several dozen trees had been felled across the roadway.

Corporal Madonna Saunderson said some trees that were found were partially cut for felling.

“This creates a hazard where these trees can fall unexpectedly due to wind. Three stacks of tires were also noticed, each covered by tarps and trees, and contained several jugs of accelerants like gasoline, diesel, oil, kindling, and bags full of fuel soaked rags,” she said.

RCMP have contacted the Wet’suwet’en Hereditary Chiefs about the items that were located. 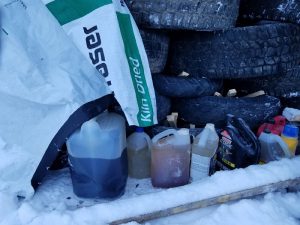 Gasoline under a tarp on Morice West Forest Service Road (supplied by: RCMP)

“Our primary concerns are public and police officer safety. We will take steps to ensure those who unlawfully interfere with or threaten the safety of any person or property may be held accountable in accordance with the laws of Canada,” she said.

Coastal Gas Link responded to the felled trees in a statement claiming the findings to be disappointing.

“Our primary concern is the safety of all users of this public forestry road, including those who wish to protest our activities. Unlawful actions that put people at risk for serious harm are dangerous, reckless and unacceptable, and do not reflect a peaceful protest,” CGL President David Pfieffer said.

Chief Namoks said earlier this week the felled trees are for the safety of the Wet’suwet’en people and the territory.

According to RCMP, it remains hopeful that its efforts will result in a resolution.

Officers from the Community-Industry Safety Office continue to monitor the Morice West Forest Service Road area to ensure the safety of individuals at the Healing Centre, Coastal GasLink employees, and the general public