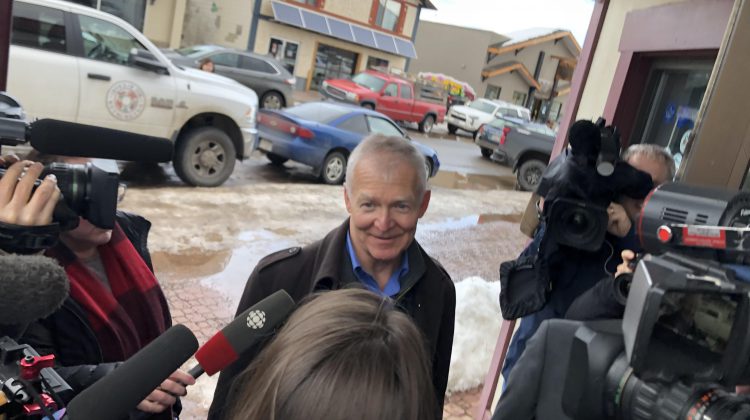 BC Minister of Indigenous Relations and Reconcilliation Scott Fraser outside the Office of Wet'suwet'en (Supplied by: Lindsay Newman)

Both ministers said the talks were productive and a very good start but would not explain the details of the meeting.

“We don’t want to jeopardize anything, we had a productive start and we’re hoping for a very solid day tomorrow,” Fraser said.

When the meeting concluded Chief Na’moks left without making a comment.

The Hereditary Chiefs released a statement before the meetings calling it a ‘first step’ after the chief invited Prime Minister Justin Trudeau and BC Premier John Horgan but both declined.

According to the Hereditary Chiefs, they agreed to the meeting after the RCMP agreed to stop all patrols on Morice West Forest Service Road.

“The Hereditary Chiefs have committed to keeping the road free of obstructions for the passage of Wet’suwet’en people and their guests without interference,” the statement said.

A small group of people who were for the pipeline went inside the meeting to explain to the ministers why they felt individuals didn’t have a voice.

According to Bonnie George, they were not invited to the meeting but went inside to make a statement and said everyone in the room heard the concerns. 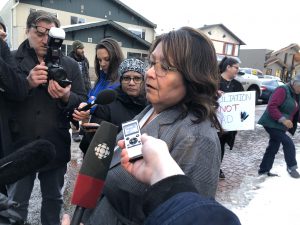 Bonnie George speaking with reporters outside Office of Wet’suwet’en (Supplied by: Lindsay Newman)

She said she was blessed that everyone was able to sit in one room together.

“There was a little bit of tension but the majority of the Dini Ze’ and Zaki za were quite respectful but this is our first step towards reconciliation and it makes my heart feel good as a Wet’suwet’en matriarch,” she said.

George along with other individuals gathered outside the Office of the Wet’suwet’en Thursday afternoon before the meeting. (Feb 27).

She said the conflict is no longer about the pipeline.

“We’re locked out of this building and I have a statement here on behalf of our Wet’suwet’en people. I’ve gathered this information for the past several months from elders, grassroots members,” she said.

According to Wet’suwet’en Hereditary subchief, Gazy Naziel he was not invited to the talks between the chiefs and the government officials.

“When you’re locked out of the OW as a Hereditary Chief it’s not a very good feeling when just a few that are not living by our law,” he said.

Both of the ministers said they were hopeful and optimistic about the talks.

Fraser said he is hoping to deepen the relationship with Hereditary Chiefs.

The second day of meetings will happen Friday (Feb 28) in Smithers.