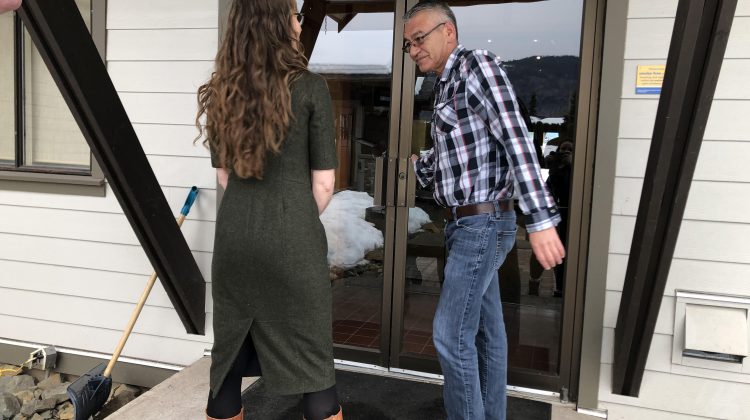 Chie Na'moks walking into the meetings after a short break (supplied by: Lindsay Newman)

Talks continue in Smithers with the Wet’suwet’en Hereditary Chiefs and senior government officials.

The meetings have been ongoing since around 8:30 Friday morning (Feb 28).

Federal Crown-Indigenous Minister RelationsCarolyn Bennett and BC Minister of Indigenous Relations and Reconciliation Thursday afternoon at the Office of the Wet’suwet’en.

According to Liaison Nathan Cullen, all parties have a sense of optimism and the talks are productive and ongoing.

Cullen said there is a lot of motivation to find a peaceful resolution.

“I have seen nothing but dedication from the parties and their teams to really get at the work and find out where the points of common interest lie because if you peel back what everybody is saying there’s a dedication to a peaceful resolution,” he said.

While the meetings were happening supporters of the Hereditary Chiefs held signs in solidarity outside of the meeting place.

Antoinette Austin said the land is at stake of being robbed from the Wet’suwet’en. 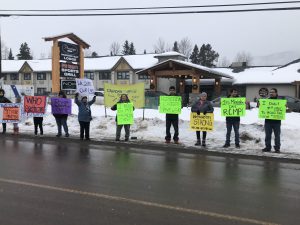 Hereditary Chief supporters outside of the meeting on Friday (supplied by: Lindsay Newman)

“When you think about rounding it off to like 200km of the right of way, 200 metres wide that’s territory that is being taken from the Wet’suwet’en, taken because as soon as they take it, they own it and that is not okay with us,” she said.

Austin also explained what she would like to see come out of the talks.

“The chiefs take their stand, maintain a stand with the government the territory is belonging to the Hereditary Chiefs and I can only speak on behalf of the Laksamshu Chiefs but to recognize that that territory belongs to the Wet’suwet’en,” she said,

She also added the Hereditary Chiefs do have a say.

The talks began Thursday (Feb 27) and continued for about three hours.

Both ministers said they were optimistic and the meeting on Thursday was productive.

Coastal GasLink announced yesterday it agreed to pause construction for two days at the Morice West Forest Service Road as the talks were ongoing.