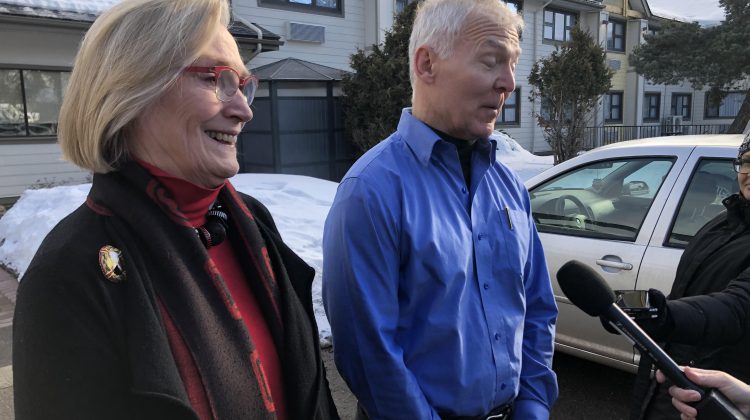 Bennett and Fraser talking to reporters outside of the ongoing meetings (supplied by: Lindsay Newman)

There is still no resolution after the second day of talks with senior government ministers and the Wet’suwet’en Hereditary Chiefs ended into early Saturday morning.

According to Fraser, talks going into the morning is a good sign and they will know more about progress Saturday (Feb 29).

Fraser also added the Ministers cannot disclose what is going on in the meeting.

“What we’ve learned from the Wiggus process it is about respect and humility but, when you’re still talking, this is a very good sign and we hope that we remain optimistic that we will be able to find a conclusion that’s really good for the Wet’suwet’en Nation,” she said.

According to Fraser, the ministers will have more information on how long the talks will be going after the meeting on Saturday,

Minister Bennett said the governments committed that the work will continue.

“This is really important and very complex and we’re committed to getting the work done,” she said.

Coastal GasLink construction is expected to resume on Monday (Mar 2) after they took a two-day pause as the Hereditary Chiefs undergoes the meetings with Bennett and Fraser.