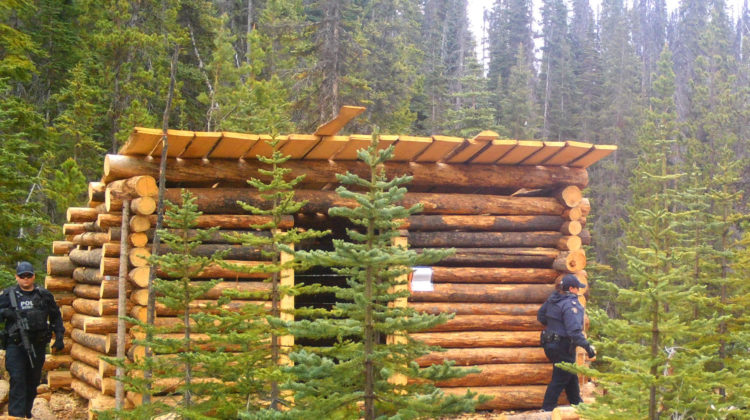 RCMP seen around the smokehouse (supplied by: Gidimt'en Clan)

Concerns have spiked after RCMP were seen patrolling a smokehouse belonging to Hereditary Chief Woos with assault weapons earlier this month.

The smokehouse is located near the Coastal GasLink pipeline site on the Morice West Forest Service Road area at the headwaters of the Wedzin Kwa river and is available for use of the Cas Yikh people to harvest fish and feed Wet’suwet’en families.

According to Gidimt’en Access Point Media Coordinator Jennifer Wickham, the photos are from patrols that were conducted on June 10 and June 18.

Wickham also confirmed that CGL posted a notice on the smokehouse that said the structure must be moved because it would prevent or impede work in the area. 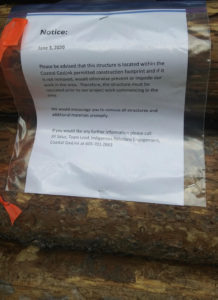 photo of the notice by CGL (supplied by: Jennifer Wickham)

She said there are concerns with heavily armed RCMP officers in and around the territory.

“For sure we’ve been afraid or deterred from going out and doing our regular activities because some of those things would involve having a rifle with us and could you imagine someone with a rifle and ran into one of those guys,” Wickham said.

According to the RCMP, the officers seen in the photos are members of the Quick Response Team (QRT) and have been assigned to the Community-Industry Safety Office.

Wickham also said the Gidimt’en Clan did not know about the QRT.

“They [RCMP] say they’re in weekly communications with the leaders but we didn’t know there was a new Quick Response Team stationed in Houston so, that’s interesting and that was news to us,” she said

CPL Madonna Saunderson said the RCMP is fully aware the RCMP’s actions have been monitored.

“The photo’s being circulated online relate to recent patrols and the check of a newly constructed building, which is on the pipeline’s right of way, and is therefore in breach of the BC Supreme Court Injunction,” she said.

The Wet’suwet’en Hereditary Chiefs have also called on the RCMP to stop patrols in the area of the Morice West Forest Service Road area.

Wickham added since the calls the RCMP have closed the C-ISO and are working from the Houston Detachment but continue to conduct patrols.

Vista Radio has contacted CGL and they said they will not comment on the actions of the RCMP.

‘Today is a lighter day for us all,’ says Doctor Henry as visitors now allowed at B.C. long term care homes