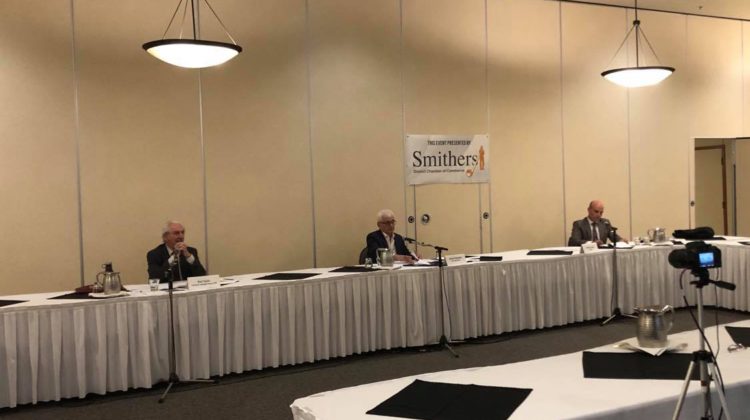 NDP candidate Nathan Cullen, Liberal candidate Gordon Sebastian and Christian Heritage candidate Rod Taylor all attended in person at the Prestige hotel but Rural BC candidate Darcy Repen could not attend in person due to being out of province but participated via Zoom.

Similar to the byelection forum residents could not attend in person due to the COVID-19 pandemic but were able to watch the event on Zoom or Facebook Live.

The Coastal GasLink pipeline and the province’s relationship with the Wet’suwet’en was one of the major topics discussed at the forum.

BC Liberal candidate Gordon Sebastian, who is also a Wet’suwet’en Hereditary Chief was the first to touch on the subject calling the NDP government two-faced.

He said both the federal and provincial governments look at rights and titles like an empty box.

“When we look at what happened with CGL it was wrong to use an injunction and use armed policemen to come in and pointing the rifles at the Wet’suwet’en that’s wrong. What we need to do is sit down with the Wet’suwet’en and talk about what it is they have there,” he said.

He added government officials need to have a discussion with the Wet’suwet’en and not use an empty box approach.

Rural BC candidate Darcy Repen said during Cullen’s time as the liaison between all parties involved with the talks that occurred earlier this year he failed.

“The chiefs are back and forth, there are more protests, progress deadlines are being missed if you care so much on Indigenous rights Nathan pay the $100,000 back and put your money where your mouth is,” he said.

Cullen responded to both Repens and Sebastian’s comment by saying if he were to choose between conflict and dialogue he will always choose dialogue.

“There is much more work to do with regards to the negotiations established with the Wet’suwet’en but I am proud that we have at least been able to move off of where we were in January of just this past year where the entire Country was facing crisis to a place where we are in conversation and negotiations,” he said.

Cullen added the Wet’suwet’en people should not have had rifles pointed at them by the RCMP.

General voting day for the provincial election is Oct 24 and advanced polls are currently open until Wednesday (Oct 21).