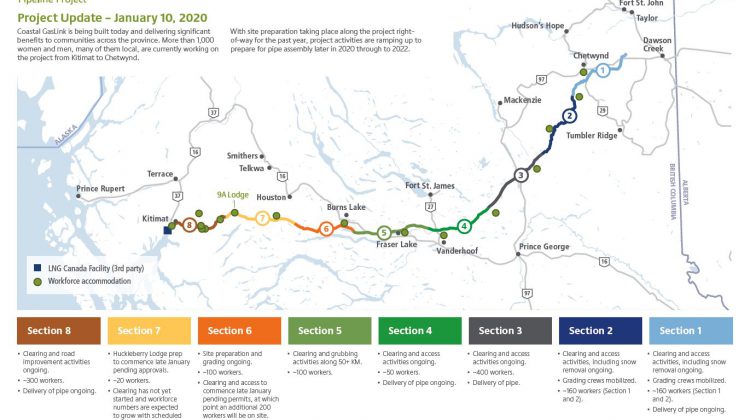 A map of the Coastal GasLink pipeline (supplied by: CGL)

After a COVID-19 outbreak has been declared at the LNG Canada project site in Kitimat a group of Wet’suwet’en women is urging Provincial Health Officer Dr.Bonnie Henry to shut down Industrial Camps.

According to a press release, the Wet’suwet’en have also been informed of two cases of COVID-19 and six others in self-isolation at the Coastal GasLink Camp 9A on Unist’ot’en territory.

“We understand that the province has declared oil and gas work an essential service, however, we strongly encourage you to reconsider. The economy cannot come before indigenous lives,” the letter said.

The press release also added many chiefs, elders, and members are scared of contracting the virus and are limiting travel.

“Making a conscious decision to bring transient workers into our territories and communities is telling us that the economic gain of the province or state is more important than our language and cultures,” the letter continued.

The letter concluded with an outline for a path forward and an opportunity for meaningful reconciliation.