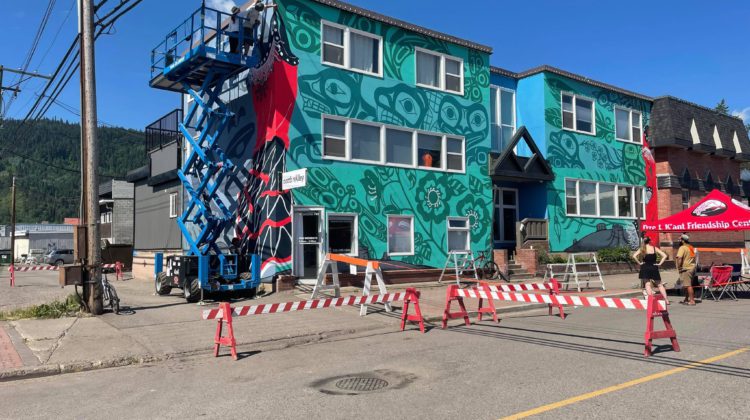 The Dze L’Kant Friendship Centre At the Heart mural project is nearing completion.

This project is a family-run initiative that commemorates Missing and Murdered Indigenous Women and Girls along Highway 16 also known as the Highway of Tears.

According to the Economic Development Office with the Dze L’Kant Friendship Centre Society Lydia Howard, the friendship centre worked with families and loved ones of the Missing and Murdered Indigenous Women and Girls during trauma informed workshops.

She added the artists Raven-Tacuara also attended the workshops.

Howard called the families true heroes of the community.

“They have advocated for their family members for many, many years and brought this issue to the forefront of people’s minds and they have really given the community a gift by providing their stories,” she said.

According to Howard, the funding for the project was provided by the Missing and Murdered Indigenous Women and Girls Commemoration fund.

She added the Friendship Centre has been careful during the workshop processes that the families have support.

Howard also said everyone will get something different from the mural.

“Public art allows you to feel what you need to feel so when I think about the families I hope that this mural brings them what they need and that they can look at the wall and get some sense of healing,” she said.

Howard added she is hopeful that mural will raise awareness, conversations and community healing.

Anyone looking for more information is being encouraged to go on the Dze L’Kant Friendship Centre Society’s website.