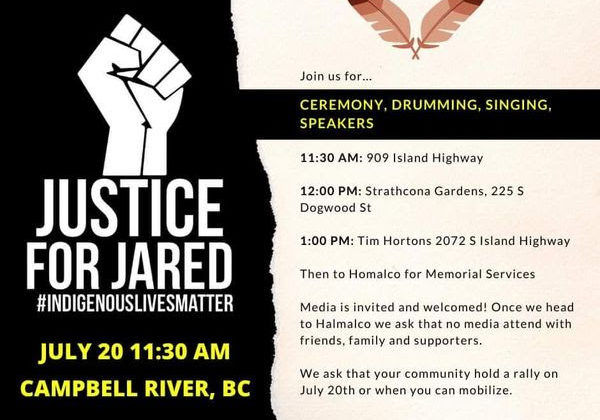 A rally was held Tuesday (Jul 20) to honour a Wet’suwet’en man who was shot and killed by police in Campbell River earlier this month.

Family and community members gathered at a Tim Hortons in Campbell River to honour Jared Lowndes and to demand justice for the killing.

Lowndes, a 38 year old father of two from the Lilyasu House was shot and killed after a failed traffic stop for an outstanding police warrant.

According to RCMP, shortly after the attempt at a traffic stop he was located when an interaction occurred between police, a police dog and Lowndes occurred.

RCMP added that Gator, the police dog on the scene, was stabbed and killed.

“He was an excellent Father, he was a very caring and compassionate son to his mother and he was a lover of children and of pets,” she said.

Blaney added his two daughters are having a hard time and it’s difficult for them to fathom about what’s really happened.

His family and the First Nations Leadership Council is calling for an inquest to be done into his death.

“They need to disarm, they need to wear always on body cams and they need to stop using police dogs as a form of violence and punitive measures against Indigenous people,” she added.

In a statement by the First Nations Leadership Council, Lowndes mother Laura Holland said a memorial for him has been dismantled almost every night.

The Independent Investigations office is now investigating the shooting.