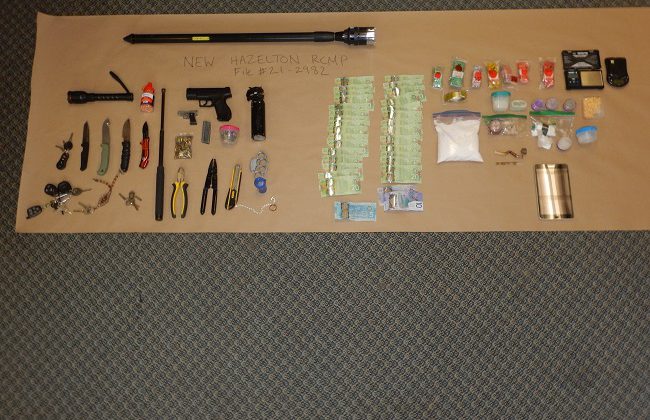 Two reports of possible impaired drivers has led to the seizure of drugs, cash and weapons by New Hazelton RCMP.

On October 4, police received a call of a possible impaired driver.

A man was seen sitting behind the wheel of a parked vehicle and when police located him they saw what appeared to be illicit drugs.

RCMP conducted a search and found further illicit drugs which appeared to be fentanyl, meth and cocaine.

The man was arrested on the scene and the investigation remains ongoing.

Meanwhile, on October 6 police received a call regarding a person reportedly passed out behind the wheel.

RCMP shortly attended and found a man behind the wheel who was recognized by police and is to be on various court ordered injunctions.

A search of the vehicle was conducted where multiple weapons and various suspected illicit drugs were found.

The man was immediately arrested and the investigation is continuing and will be forwarded to the BC Prosecution Service.