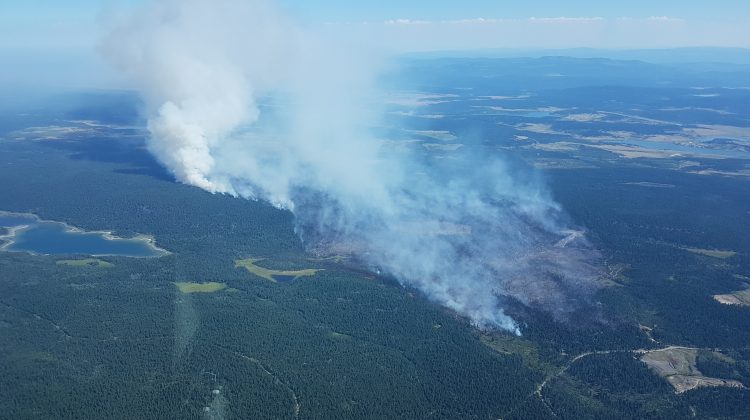 There are now 162 fires burning across the province.

Crews are battling around the clock, but it doesn’t look like they’re getting any help from mother nature.

“As it has been for the last week, wind is going to continue to be a challenge and we expect another windy day – not anywhere to the extent of yesterday but still got enough to 35-40 km an hour,” says Chief Fire Information Officer Kevin Skrepnek, “Given the potential for smoke and overcast skies, that could have an impact on visibility, which could potentially hamper some of our air operations.”

These winds are affecting us locally. Environment Canada has issued a special air statement because of them.

Emergency Management Assistant Deputy Minister Robert Turner says there’s a serious concern about running out of resources. It’s still very early in the fire season and these blazes are spread out all over BC. Because of these factors, Turner expects to be in “response mode” for the next sixty days.

“We’re really focused on increasing our state of preparedness, particularly working with local governments and Emergency Social Service providers to identify where capacity exists in the province. We’re at the beginning of the fire season so the situation could still deteriorate before it gets better,” he says.

“We’re looking at what resources are going to be required, potentially from elsewhere. There’s a lot of support right now being provided between local governments, mutual aid agreements. For example, people from the Emergency Social Services Department in Vancouver are deployed in Kamloops and in Prince George.”

Turner also quashed any talks of airlifting and evacuees to Prince George.

“There’s already a very large number of evacuees in Prince George. The plan is to go further south, down into the Okanagan and down to the Lower Mainland.”

As of this morning, the Hanceville Fire is about 45,000 hectares and is 0% contained. It has caused damages to nearby buildings.

The Gustafsen wildfire, which caused the evacuations in the 100 Mile House area, is no 5,650 hectares and is nearly 20% contained. There are 290 firefighters, 15 helicopters, and 11 pieces of heavy equipment on scene. It has also caused damage to buildings.

The White Lake Fire has crossed the Fraser River Saturday afternoon and is burning about 7 km north of Williams Lake. It’s 3,800 hectares now and crews have it 60% contained. BC Wildfire Service reports there are 61 firefighters, 12 pieces of heavy equipment, and air support, line locators and support staff on scene.