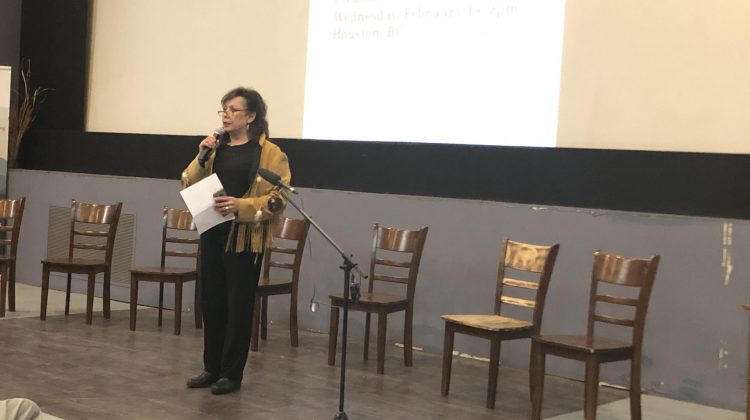 LNG supporters gathered in the Pleasant Valley Plaza theatre in Houston Wednesday afternoon (Feb 19) to discuss their perspective on the pipeline project.

Topics like jobs, media coverage and the RCMP were mentioned during the event.

According to The North Matters, the organization was asked to host the event so supporters could have a safe place to discuss their perspective.

According to one of the guest speakers, Marion Tiljoe Sheperd, this is her first time speaking out about the dispute.

Shepherd said elders and hereditary’s are not allowed to speak about the issue because only a select few are allowed.

“Because we live here in Houston we’re ostracised and it’s not fair just because we want to work. We’re from an industrial town we’ve also worked for industry,” she said.

The audience also had the opportunity to speak about the project.

One woman who is First Nations said she doesn’t get asked her opinion on the pipeline people just assume her point of view.

Shepherd says she understands the frustration the community is feeling and by attending the event that took place the word of First Nation’s for the pipeline can get out into the community.