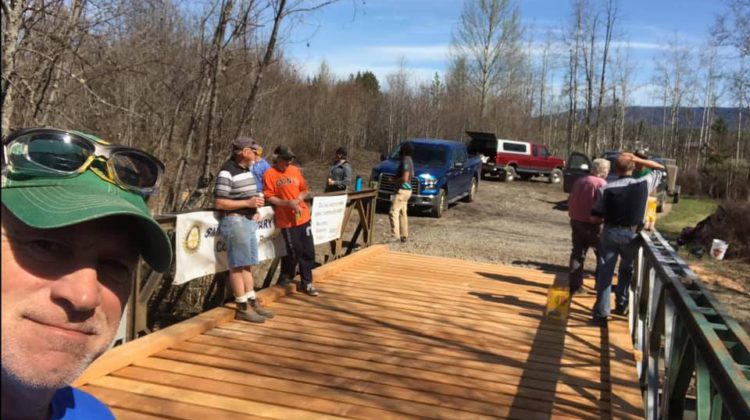 The second half of the construction of the pedestrian bridge on the Perimeter Trail behind the Smithers Golf Course has been completed.

Construction concluded on May 9.

The first half of construction took place in October where the bridge was raised.

The project was funded through the Smithers Rotary Club

According to Smithers Rotary Club Spokesperson Joe Tenant, the club resurfaced the bridge with new decking and said he thinks it was done 20 to 30 years ago.

Tenant said this is a project he’s been wanting to do for a long time.

“Looking at a bike route and a pedestrian route between Smithers and the outlining areas, Slack road and beyond out to Lake Kathlyn which is our safe route for people to travel with their children, themselves away from traffic, so it’s really good communication between the two areas,” he said.

According to Tenant, Smithers Lumberyard and Double D Equipment were among several businesses that help with the bridge and providing equipment.

Tenant also said the Rotary Club is working on other projects.

“There are some ideas that we have to help spruce up the community, right now they’re in the planning stages,” he said.

Tenant added The Rotary is working with Heartstrings to raise money and food for the food bank and have proposed to the Town to reconnect the Perimeter Trail.